The Woodlands Villages in Houston 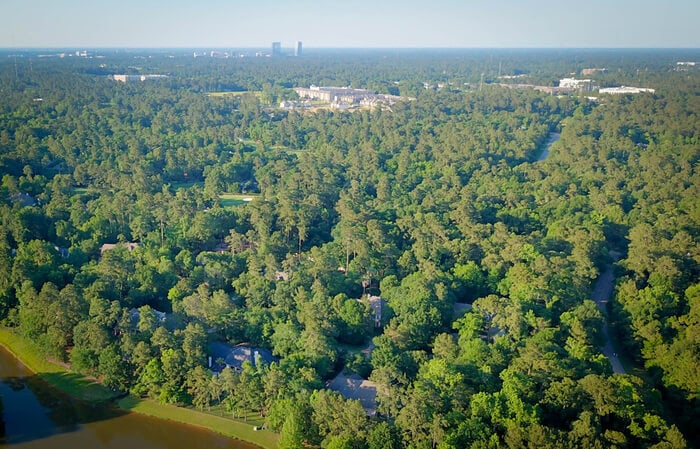 View: Homes For Sale in The Woodlands

Along Interstate 45, The Woodlands is 28 miles (45 kilometers) north of Houston. Though it started as an exurban development and a bedroom community, it has since attracted companies, including Chevron Phillips Chemical, Huntsman Corporation, Woodforest National Bank, Baker Hughes, McDermott International, McKesson Corporation, Aon plc, Maersk Line, Safmarine, and Halliburton, and now has many corporate campuses. In 1994, the Urban Land Institute gave the city a Special Award for Excellence.

The Woodlands Foundation and Growth

The Woodlands started after oil industry investor George P. Mitchell attended a symposium on creating new towns using the HUD Title VII software hosted by the Rouse Company subsidiary American City Corporation, the developer of Columbia, Maryland. George P. Mitchell dedicated it in 1974, and The Woodlands Corporation manages it as an extension of Mitchell Energy & Growth. Mitchell, an oil executive, envisioned a convention center, hotels, office parks, shopping malls, colleges, massive distribution centers, and golf courses. Houses will vary in price from modest to expensive and extensive. Mitchell wanted the building to “entice city slickers looking for far-flung suburban quality of life,” according to Bill Schadewald of the Houston Business Journal. Local sources told Schadewald that the federally sponsored HUD New Town initiative had a “poor survival rate” and questioned whether The Woodlands would succeed.

The Grogan-Cochran Lumber Mill formerly occupied the land, thus the “villages” of Grogan’s Mill and Cochran’s Crossing. Many of the planning principles and architecture consultants used in other well-known new communities of the time, such as Columbia, Maryland, Irvine Ranch, California, and Reston, Virginia, were used in the initial planning. Ian McHarg, a renowned landscape architect, teacher, and author of the seminal work Design With Nature advocated for environmental design concepts in the original development plan.

As a result of the influx of businesses, it continued to develop both residentially and commercially. Huntsman Corporation, Hewitt Associates, Lexicon Pharmaceuticals, Maersk, M&S Engineering, and Woodforest National Bank have all expanded operations in addition to Chevron Phillips. The Town Center features shopping, dining, and a waterway that resembles the San Antonio River Walk.

Hurricane Ike wreaked havoc on the city on September 13, 2008. Thousands of trees, powerlines, and billboards were brought down by sustained winds of 85 mph (137 km/h), and the Cynthia Woods Mitchell Pavilion was heavily damaged. Since Hurricane Alicia in 1983, Ike was the first hurricane to hit the region directly.

An extreme drought hit Texas in the summer of 2011, killing thousands of trees and necessitating their removal, which continued into 2012.

Schadewald said in 2011 that “Now: It was clear that The Woodlands had a bright future. Between First Colony and The Woodlands, I understood why ambitious real estate developers are more likely to strike it rich than skeptic real estate reporters.”

The area around The Woodlands and Conroe was classified as a “significant urbanized transit area” by the United States Census Bureau in 2012, meaning it is eligible to receive federal transportation funds.

Water taxis are known as “Waterway Cruisers” operated along The Woodlands Waterway from 2004 to 2018. The six Waterway Cruisers were withdrawn from the waterway on November 13, 2018, after being damaged by Hurricane Harvey the year before.

The Woodlands is divided into nine distinctive villages or communities. The first village, Grogan’s Mill, was founded in 1974, and the latest village, Creekside Park, opened in 2007.

Each village is unique in that it functions as its small town. The villages are complete with different shopping centers, village associations, parks, playgrounds, homes, and personalities within The Woodlands.

Each village has its village association with officers elected by residents of that village.

Houston Premium Homes, We’re By Your Side — No Matter What.

The Houston real estate market is moving — and if you’re ready, you can too.

The Houston Premium Homes family has earned its reputation as Houston’s Top real estate team by always putting our clients’ interests first and making the sale process simpler to navigate at every step of the way. Your Houston Premium Homes real estate agent is your trusted advisor and buying/selling specialist and will relieve you of the burden by handling all the people and moving parts to ensure you get the results you want. Houston Premium Homes Realty Group is a one-stop-shop real estate business and is just part of the reason why so much care and attention is emphasized with each and every client.

Learn About The Villages in The Woodlands Texas