Homes For Sale in Pasadena, Texas 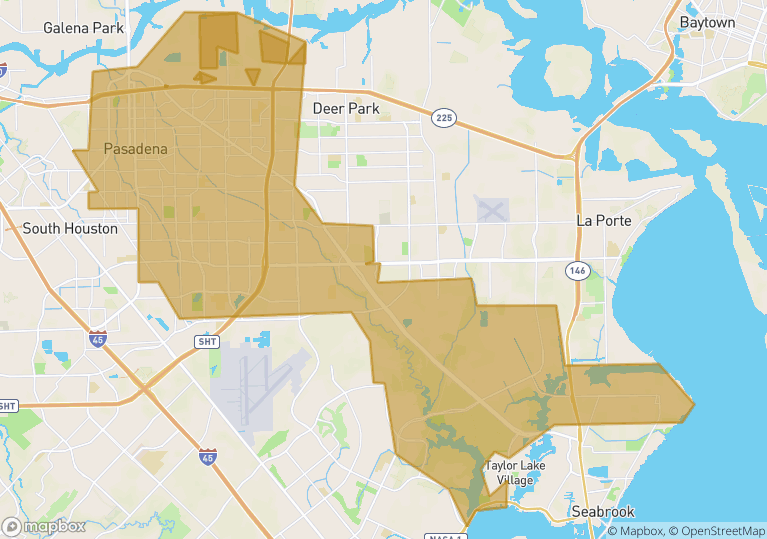 Pasadena is a city in the U.S. state of Texas, within the Houston–The Woodlands–Sugar Land metropolitan area. As of the 2010 U.S. Census, the city's population is 149,043, making it the seventeenth most populous city in the state of Texas, as well as the second-largest city in Harris County.  The area was founded in 1893 by John H. Burnett of Galveston, who named the area after Pasadena, California, because of the perceived lush vegetation. The Pasadena Volunteer Fire Department is the largest of all volunteer municipal fire departments in the United States. [1]

Pasadena is generally considered to be a blue-collar town. 39.78% of the Pasadena workforce is employed in blue-collar occupations, compared to the national average of 27.7%. Overall, Pasadena is a city of construction workers and builders, sales and office workers, and service providers. There are especially a lot of people living in Pasadena who work in office and administrative support (10.63%), sales jobs (9.28%), and food service (6.15%). Pasadena is an extremely ethnically-diverse city. The people who call Pasadena home describe themselves as belonging to a variety of racial and ethnic groups. People of Hispanic or Latino origin are the most prevalent group in Pasadena, accounting for 70.49% of the city’s residents (people of Hispanic or Latino origin can be of any race). The greatest number of Pasadena residents report their race to be White, followed by Black or African-American. Important ancestries of people in Pasadena include German, Irish, English, French, and European. [2]

The chance of becoming a victim of either violent or property crime in Pasadena is 1 in 32. Based on FBI crime data, Pasadena is not one of the safest communities in America. Relative to Texas, Pasadena has a crime rate that is higher than 88% of the state's cities and towns of all sizes. Learn More

Is Pasadena Texas a good place to live?

Once considered a sleepy but growing town just down the road from Houston, Pasadena has won a new distinction as one of America's best "under-the radar" suburbs for 2020. Note to proud residents of Pasadena: It's the only Texas suburb on the list. A new ranking from Zillow and Yelp has placed Pasadena at No. Learn More

What is Pasadena TX known for?

Pasadena quickly established itself as the strawberry capital of the region. By the 1920s all of southeast Harris County was known as "Pasadena Acres." In addition to strawberries, the Pasadena farmers sold cantaloupes, cape jasmine flowers, cucumbers, and other produce. Learn More

How far is Pasadena from Houston Texas?

There are 10.77 miles from Houston to Pasadena in southeast direction and 14 miles (22.53 kilometers) by car, following the I-45 S route. Houston and Pasadena are 18 minutes far apart, if you drive non-stop . Learn More

Is Pasadena a rich area?

What does the word Pasadena mean?

The word Pasadena literally means “valley” in the Ojibwa (Chippewa) Indian language, but it has been interpreted to mean “Crown of the Valley” and “Key of the Valley,” hence the adoption of both the crown and the key in the official city seal. Learn More

Houston Premium Homes Realty Group family has earned its reputation as Pasadena’s Top Real Estate Team by always putting our clients’ interests first and making the homeownership process simpler to navigate at every step of the way — from pricing your home to having it ready to sell to promoting your listing, to leading negotiations and closing the deal. Houston Premium Homes Realty Group is a one-stop-shop real estate business and is just part of the reason why so much care and attention is emphasized with each and every client. Contact us today for all your real estate questions!