Condominiums For Sale in Cypress, TX

Condos For Sale in Cypress, Texas 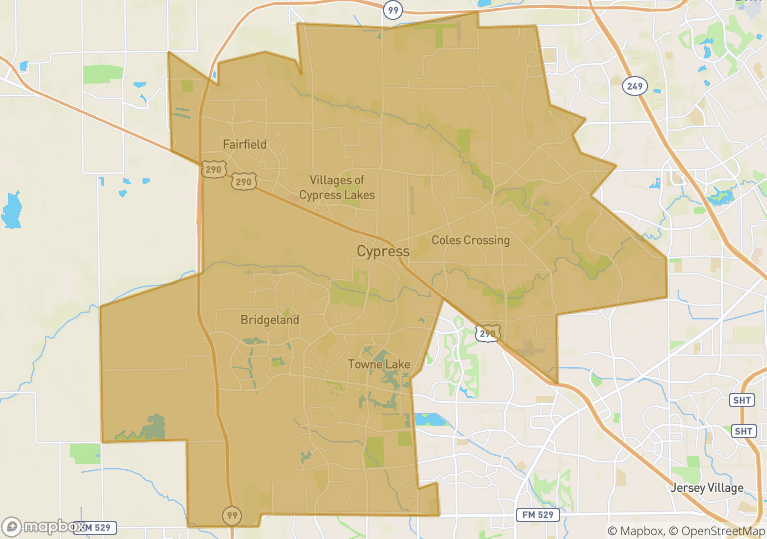 Cypress is an unincorporated community in Harris County, Texas, United States, located completely inside the extraterritorial jurisdiction of the City of Houston. The Cypress area is located along U.S. Highway 290 (Northwest Freeway) is twenty-four miles (35 km) northwest of Downtown Houston. The Cypress urban cluster ranks 50th in the top 100 highest-income urban areas in the United States. Large scale residential and commercial development beginning in the 1980s transformed the once rural area into one of the Houston area's largest suburban communities. [1]

Cypress is a larger medium-sized town located in the state of Texas. With a population of 152,080 people and 15 constituent neighborhoods, Cypress is the 23rd largest community in Texas. Cypress has seen a significant amount of newer housing growth in recent years. Quite often, new home construction is the result of new residents moving in who are middle class or wealthier, attracted by jobs, a healthy local economy, or other amenities as they leave nearby or far away areas for greener pastures. This seems to be the case in Cypress, where the median household income is $111,161.00. Cypress real estate is some of the most expensive in Texas, although Cypress house values don't compare to the most expensive real estate in the U.S. [2] What is a condominium?

Is Cypress Texas a good place to live?

When you study where Cypress has been and where it currently stands, it's clear that this community is becoming more than just a “suburb of Houston” – it's becoming a highly sought after place to live for those looking to provide their families with safe and comfortable living.

The Cypress urban cluster ranks 50th in the top 100 highest-income urban areas in the United States. Both Cypress Zip codes 77429 and 77433 are ranked among the Top 25 wealthiest in the Houston area. Learn More

How far is Cypress Texas from Houston?

The distance between Houston and Cypress is 25 miles.

Does it flood in Cypress Texas?

How Safe Is Cypress Texas?

Cypress has an overall crime rate of 13 per 1,000 residents, making the crime rate here near the average for all cities and towns of all sizes in America. According to our analysis of FBI crime data, your chance of becoming a victim of crime in Cypress is 1 in 74. Learn More

How far is Cypress from Dallas?

The distance between Cypress and Dallas is 206 miles.

How far is Cypress Texas from the beach?

There are 53.40 miles from Cypress to Beach City in southeast direction and 61 miles (98.17 kilometers) by car, following the I-610 E route. Cypress and Beach City are 1 hour 10 mins far apart, if you drive non-stop . This is the fastest route from Cypress, TX to Beach City, TX. Learn More

What zone is Cypress Texas?

Houston Premium Homes Realty Group family has earned its reputation as one of Cypress Top Real Estate Team's by always putting our clients’ interests first and making the homeownership process simpler to navigate at every step of the way — from pricing your home to having it ready to sell to promoting your listing, to leading negotiations and closing the deal. Houston Premium Homes Realty Group is a one-stop-shop real estate business and is just part of the reason why so much care and attention is emphasized with each and every client. Contact us today for all your real estate questions!

Contact Us About Buying a Condo in Cypress, Texas