Homes For Sale in Atascocita, Texas 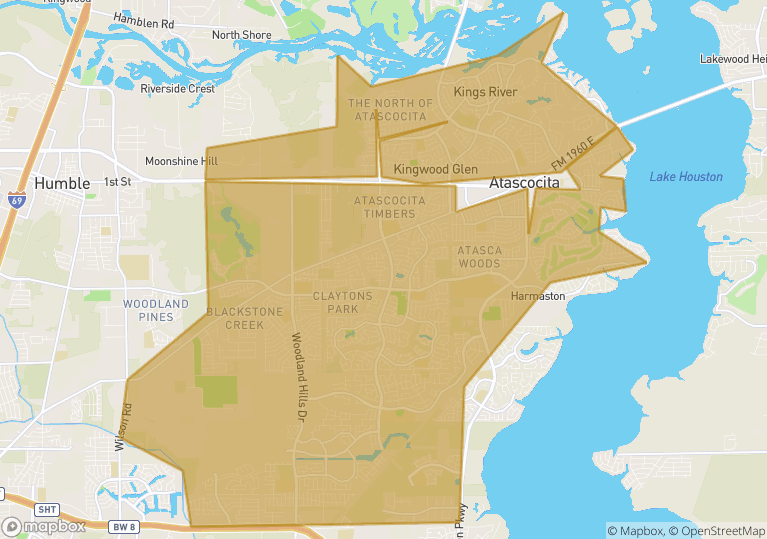 Atascocita is a census-designated place (CDP) in an unincorporated area within Harris County, Texas, United States within the Houston metropolitan area.  As of the 2010 census it had a population of 65,569. It is located north and south of Farm to Market Road 1960 about 6 miles (10 km) east of Humble and 18 miles (29 km) northeast of downtown Houston in northeastern Harris County. Learn More

Is Atascocita a good place to live?

Although it is an unincorporated area of Harris County, Atascocita put itself on the map as one of the best places to live in Texas. Learn More

What is Atascocita known for?

How far is Atascocita Texas from San Antonio?

Is Atascocita a city?

How did Atascocita get its name?

Construction in the area began in the 1970s, and the community was named after the historic Atascocita Road that followed the route of present-day FM 1960. In the 1990s Atascocita was one of the fastest growing developments in the Houston area and encompassed more than fifteen neighborhoods. Learn More

When was Atascocita Texas established?

In 1757 The Spanish built a fort and established the Atascocita settlement on this road to prevent French trade with the Indians. Learn More

What county is Atascocita Texas?

As one of the most diverse cities in the US, it’s no wonder Houston is a popular spot to relocate to. With the second most Fortune 500 headquarters plus strong manufacturing, aeronautics, and healthcare industries, Houston is a great place to live and work. But “H-Town” has more than just a strong industrial backbone. Learn More

What is the coldest month in Houston?

What part of Houston is Beyonce from?

Beyoncé was born in the Third Ward of Houston. The Third Ward is one of six historic wards in Houston and became the center of the city’s African-American community in the 1970s. Learn More

Houston’s real-estate market has shown incredible stability throughout the coronavirus pandemic. According to the Houston Association of Realtors’ February-to-February market report, sales of single-family homes increased 1.2 percent even as the pool of available homes shrank. Learn More

Houston Premium Homes Realty Group family has earned its reputation as Houston’s Top Real Estate Team by always putting our clients’ interests first and making the homeownership process simpler to navigate at every step of the way — from pricing your home to having it ready to sell to promoting your listing, to leading negotiations and closing the deal. Houston Premium Homes Realty Group is a one-stop-shop real estate business and is just part of the reason why so much care and attention is emphasized with each and every client. Contact us today for all your real estate questions!